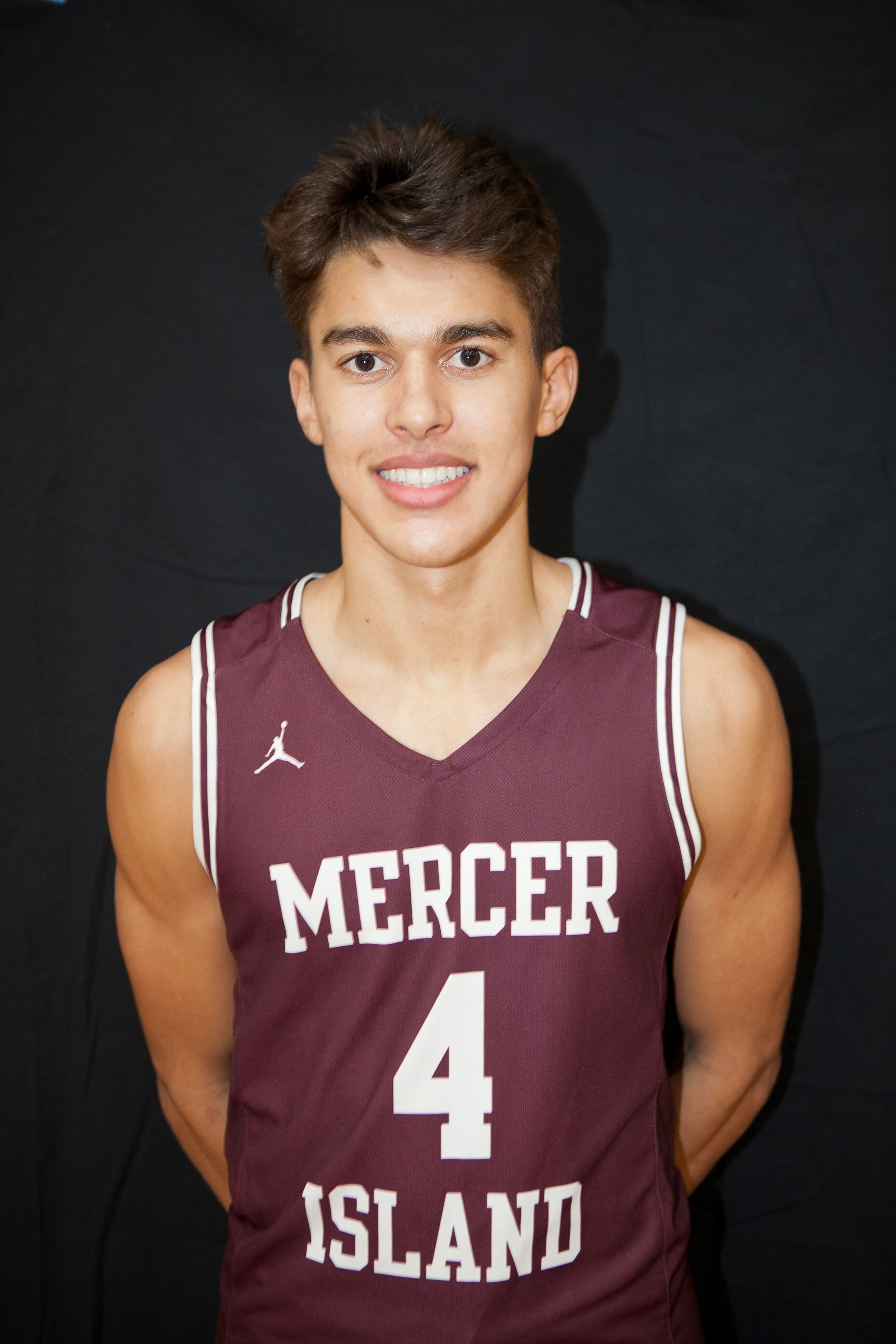 The on-court dominance of the 2019-20 Islanders has extended to awards season, with three seniors and three underclassmen recognized for their play. Athletic senior wing Adam Parker was named co-MVP of the KingCo league, with senior Nigel Seda and junior David Pickles named to the first team. Senior Luke Wenzel, who earlier in the season shattered the Mercer Island career record for charges taken, was honored with a second team selection. Junior Tyler Butson and sophomore Chris Clark were both KingCo honorable mention picks. Congratulations, Islanders!

Congratulations to senior Adam Parker for being named to the WIBCA 3A All State Team, and to all the other players… https://t.co/4kEAYSCNR9

RT @GameTimeEvents: Thanks to both @LakesMentality and @MIHSBasketball for being a part of a great day! We could not do this without you! h…

As the end of our season came in an unexpected way, we thank everyone for their support! We had a historic run , Ki… https://t.co/Ln7sEbgk6V

Through a week of adversity and loss that reaches far beyond the game, the Islanders showed strength, determination… https://t.co/7yi0aCtGco

PARTICIPANTS: Open to ALL boys basketball players in 3rd through 9th grades (participation in MI Select teams not required)

WHAT: Skills development and conditioning for basketball players in 3rd through 9th grades. Mixed aged groups give players experience playing up and mentoring each other in preparation for mixed ages on high school teams. Skills work lead by coaches Glen Dean and Yan Fatien, conditioning lead by coach Benson Sims. 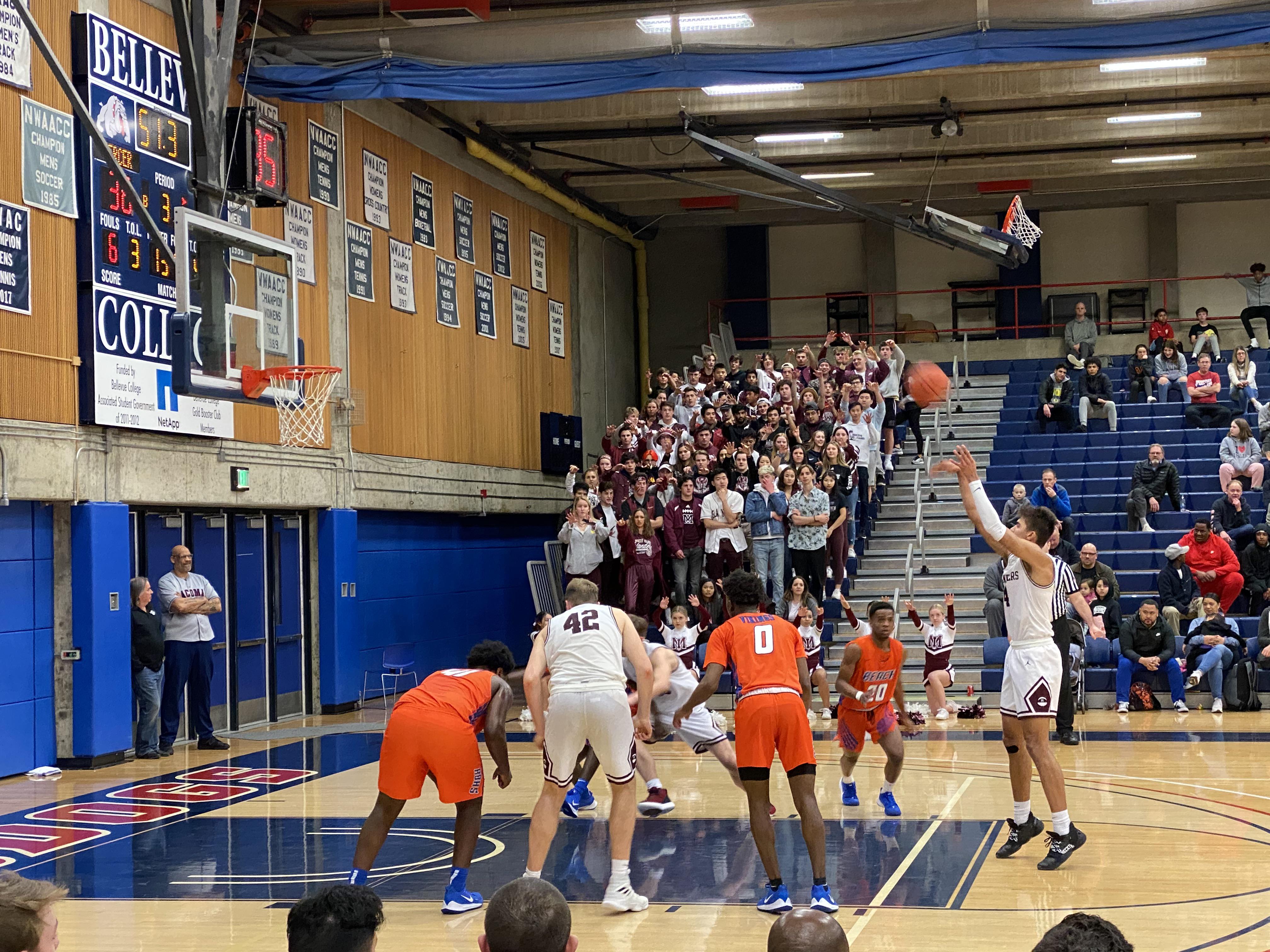 Adam Parker drains a free throw for 1 of his 14 points, as the rowdy Islander student section looks on.

Tuesday night the winning streak came to an end, but Mercer Island dreams of a state tournament berth did not. In an aggressive game marred by multiple technical fouls, Rainier Beach took home a 50-48 victory. Senior Adam Parker lead the Islanders with 14 points and 8 rebounds, and David Pickles added 10. With the loss, Mercer Island will take the long road to State, needing two wins to move on. The first of those games is today at 3:30 at Bellevue College, facing Metro's Seattle Prep Panthers in a loser-out game.

Perhaps it's fitting that the road to state won't be an easy one. Even during the team's undefeated KingCo regular season, wins were often tight and hard fought. In the end, the Islanders found a way. Now they're tasked with grinding out two more wins to keep the season alive. Come out and support the Islanders as they make it happen!

Two of the state's most storied basketball programs face off Tuesday night at Bellevue College. Over the last 35 years, Mercer Island and Rainier Beach have won a combined 13 state championships in boys basketball. The #7 seed Vikings, led by first team all-Metro guard John Hart, beat Nathan Hale 66-63 to earn a spot against the #2 seed Islanders.

The Islanders are coming off an undefeated league season, led by 5x KingCo Coach of the Year Gavin Cree, and are riding the play of 6 all-league honorees. For more on the Islanders' dominant 61-36 KingCo championship game win over #2 seed Interlake, visit Mercer Island Basketball. Thank you to the large and loud crowd that went on the road to cheer on the boys! 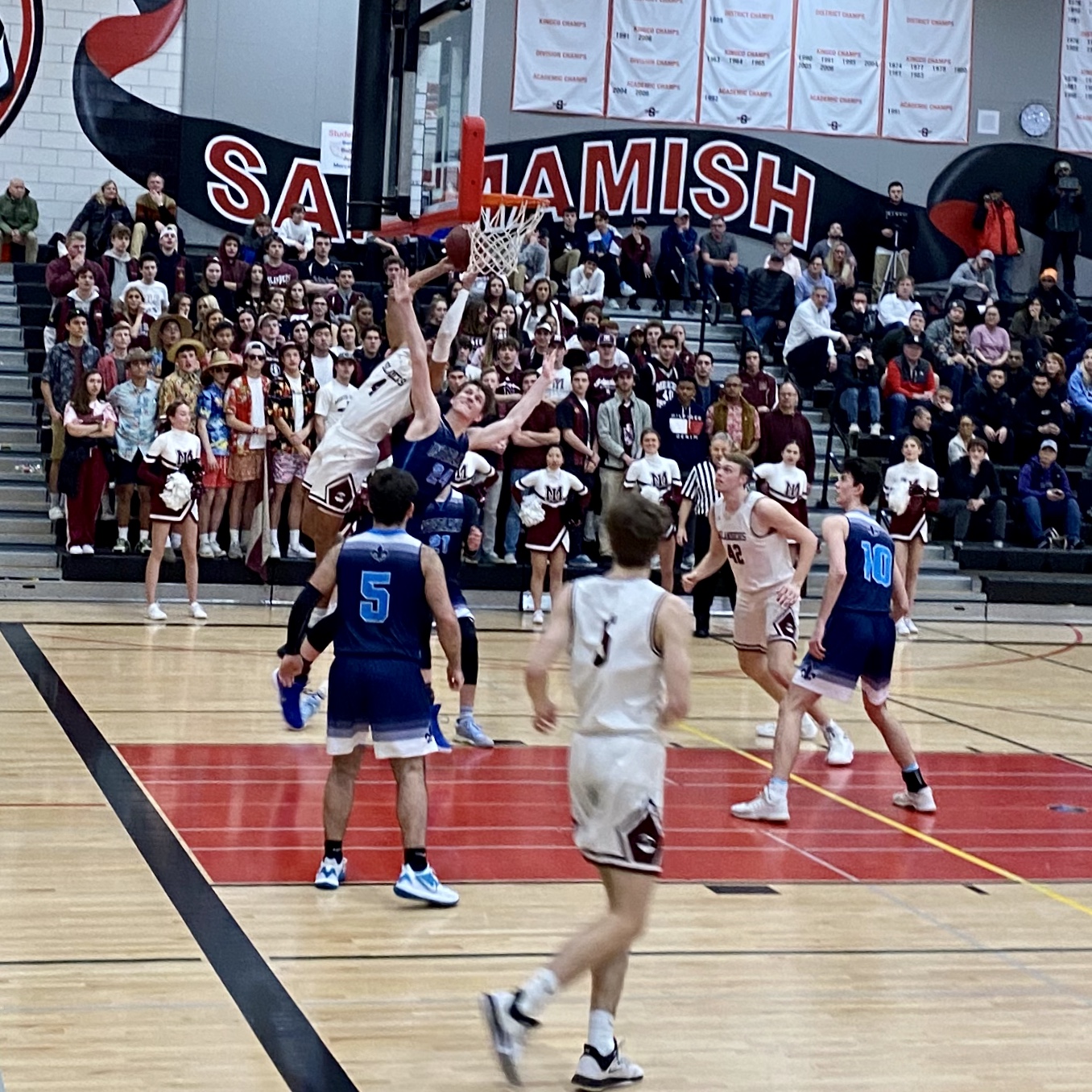 With some familiar faces leading the way, they did it again. David Pickles scored the first 7 points of the game, and 2019-20 KingCo co-MVP Adam Parker hit 3 three-pointers in the first half, leading Mercer Island to a 26-14 lead. In the third quarter senior Nigel Seda and junior Tyler Butson put the game away, and the Islanders cruised to the 61-36 win over Interlake in the league championship game.

Seda came out of halftime with an aggressive mindset, consistently creating space and finishing with creative shots inside. When Interlake adjusted to close the lanes on Seda, it freed up Butson to drain 2 threes, on his way to 10 points in the quarter and 13 overall. Parker ended up with 12 points and 8 rebounds. David Pickles added 11 inside, and as he did in their previous matchup, helped neutralize Interlake's star 6'10" big man, Derek Kramer. Pickles was a crucial part of an aggressive Islander defense that limited #2 seed Interlake to only 12 points in the second half. Interlake has only 6 losses on the season, 3 coming against the dominant Islanders.

The play of the game went to fan favorite Matt Nimmo. In the fourth quarter, the Mercer Island forward had the ball at the top of the key as the shot clock ticked to zero. The frustrated Interlake defense swarmed Nimmo, mauling him as he rose to shoot. It seemed unlikely the Islander senior would even get off the shot, but on this team, and during this historic run, the shot would indeed fall. A large Islander contingent of students, parents, and fans made the trip to Interlake, and every last one of them made sure Nimmo felt their appreciation. The senior reciprocated, stepping to the line, sinking the free throw, and making light work of a four-point play. Nimmo and the Islanders won for the 11th straight time, and now head to the SeaKing tournament with eyes on extending that streak. The Islanders' first game will be next Tuesday at 8:15, at Bellevue College.

As an all-senior starting lineup stepped onto the court Friday night, the KingCo standings said there was nothing on the line. The league title had been clinched, and a playoff game against second place Interlake was already scheduled (8:15pm Tuesday at Sammamish High School). But this was no ordinary game. It was Senior Night, bragging rights with Bellevue were on the line, and so was Islander history. 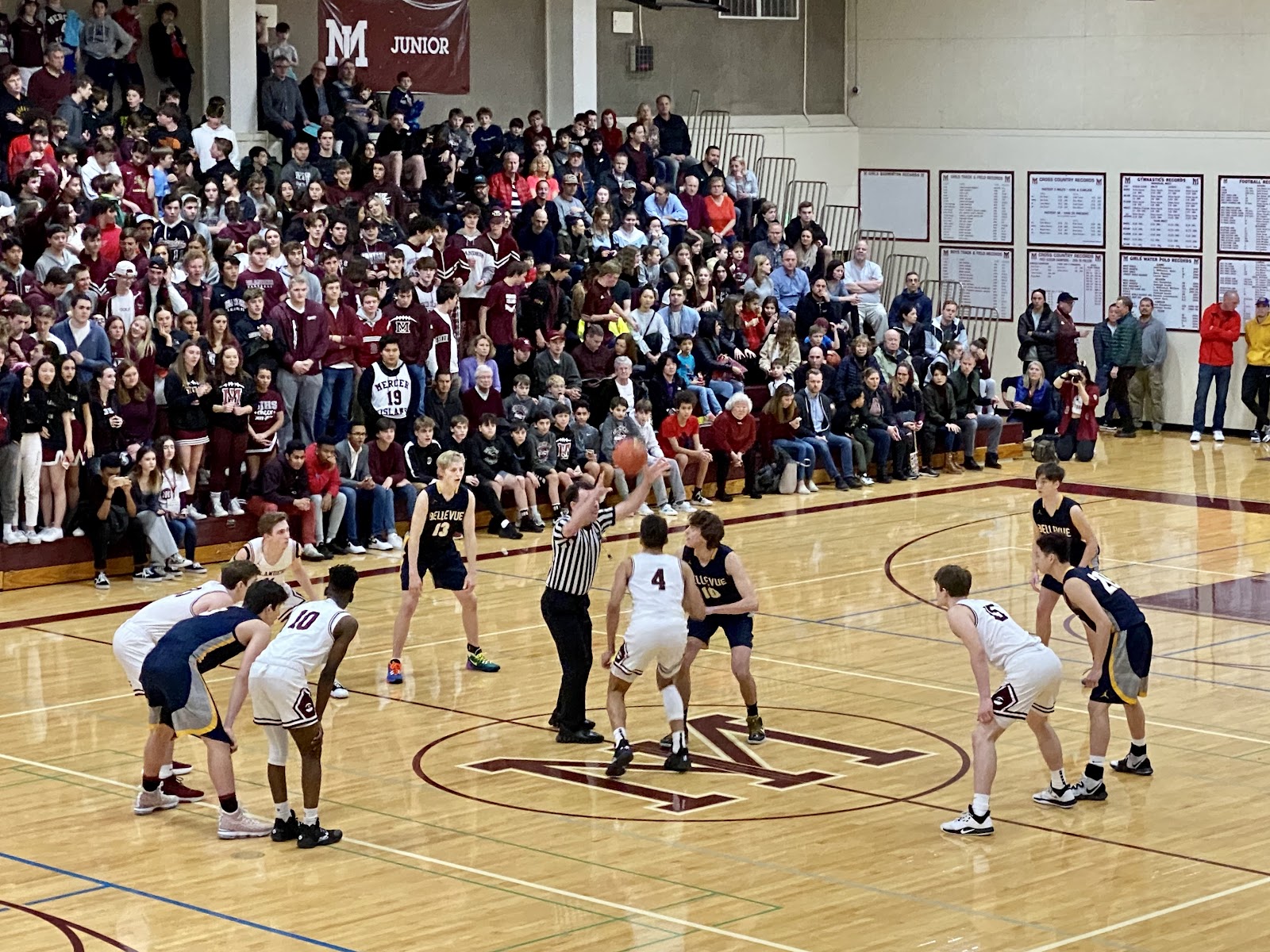 Seniors Adam Parker, Nigel Seda, Lukas Varney, Nate Wenzel, and Luke Wenzel started the game, and senior Matt Nimmo was the first player off the bench. Their intensity set the tone early, juniors David Pickles and Tyler Butson came off the bench to make big plays late, and the Islanders defeated the rival Wolverines 52-48 at Mercer Island High School. Pickles was the difference for much of the game. Bellevue had no answer for the big junior, as he led the Islanders with 15 points, and was a disruptive presence all game on the defensive end.

While Parker and Seda have consistently been top scorers for the Islanders, it was their defense that helped seal the victory Friday night. Late in the game the Wolverines turned to 6’6” sophomore Tom Nash, and the athletic underclassman drove the lane with hopes of giving Bellevue the lead. Adam Parker had other plans.

In a play straight out of an ESPN SportsCenter Top 10, Parker rose to contest Nash’s shot...and then rose some more. Years of hard work and training seemed to be unleashed in a single play, as Parker swatted Nash’s attempt back to the 425. The home crowd exploded, expecting that the game had been clinched, but it wouldn’t be the Wolverines’ last chance to score.

With the ball in the hands of star Hudson Hanson, Bellevue looked to tie up the game with 20 seconds left to play. As Hansen eyed an opening and made his move to the hoop, lighting quick Nigel Seda picked him clean on the perimeter. As they did with Parker’s block, the home crowd gave Seda a season’s worth of cheers for his single brilliant play. Tyler Butson would later step to the free throw line and calmly sink both shots, clinching the 52-48 victory.

With the victory, this Islander team has entered the record books of the storied Mercer Island Basketball program. Over the last two years, Mercer Island is riding a 23 game KingCo winning streak. They haven’t lost a home game (KingCo or non-conference) in two seasons. With an undefeated league campaign this year, the 2020 team becomes only the fifth Islander squad in thirty years to make it through the KingCo gauntlet unscathed. Since 1990, the only Mercer Island teams to do so are 1998, 2001, 2004, and 2008. And now the 2020 team joins them.

Lukas, Matt, Nate, Adam, Luke and Nigel will step onto the home court one last time

The 5th grade ETL team has clinched a birth to the State Tournament in Spokane. They join the 7th grade ETL team, who qualified early in the season. Good luck to both teams!

Luke Wenzel drains a three in the Islanders' January 24th win over Juanita.

CREE NAMED COACH OF THE YEAR In sports, the conventional wisdom is that it's impossible to follow a legend. Someone forgot to tell Coach Gavin Cree. Eleven years ago, Coach Cree was named the successor to Hall-of-Fame coach Ed Pepple, for whom he played (and won a state title). All he's done since is win five KingCo Coach of the Year awards. The fifth came this week, as Cree was honored for the Islanders' undefeated league season. Nice work (again), Coach Cree - the Island is lucky to have you.

Thanks to  the generous contributions of our MI basketball community, including your membership with the MI basketball booster club, scholarships are available for the Boys Basketball Select and high school team travel.

Our scholarship application form is below.  If you are interested, please download the form and send to mibbbcscholarship@gmail.com